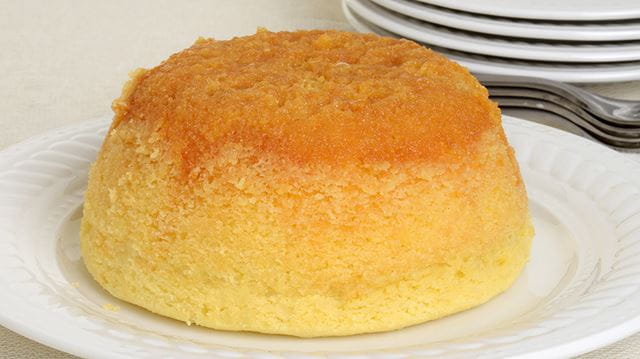 Foolproof tips for the perfect autumn and winter comfort food

Like many traditional cooking techniques steaming a pudding can seem daunting – but it’s actually very easy and once you have a basic sponge pudding recipe you can make comforting puddings throughout the Autumn and Winter – delicious, economic and very impressive.  You don’t need a steamer as you can easily steam a pudding in a large saucepan:

1. During steaming, the base of the pudding bowl cannot touch the direct heat of the pan which is why you need a trivet or upturned, heatproof saucer.

2. Leave yourself enough time for the steaming – always check the recipe for timings before you start.

3. Cut a circle two times larger than the pudding basin rim diameter, of both baking parchment and aluminium foil.

4. Spoon your sponge mixture into the pudding basin and smooth the surface.

6. Tie the pudding very tightly around the rim with string and create a handle by tying the excess string across the top of the basin and tying it under the string on the opposite side – this will help you lift the pudding out of the pan once it’s cooked. Trim any excess baking paper and foil, leaving a 2.5cm border - turn the edges in on themselves to seal.

7. Place an upturned heatproof saucer or small trivet in a large, deep saucepan, and place the pudding basin on top. Add enough just-boiled water to the pan to come halfway up the sides of the basin.

8. Cover the pan with a tight-fitting lid and place over a low heat. Allow to steam in the gently simmering water adding more water to the pan if necessary - make sure the pan does not boil dry.

9. Cut the string from the basin and discard the foil and paper. Run a knife around the edge of the pudding to loosen the sides, carefully invert onto a deep plate and remove the basin.

1. Beat the butter and sugar with an electric whisk until light and fluffy.

2. Whisk in half of the eggs followed by half of the flour then whisk in the remaining beaten eggs and flour. The mixture should be just a dropping consistency - add a splash of milk if the mixture is very thick.

3. Butter a 1.2litre pudding bowl and prep as above – steam the pudding in the gently simmering water for 1¾ hours - the pudding is done when a skewer inserted into the centre (through the aluminium foil and baking paper) comes out clean. (For Syrup sponge pudding spoon 75g golden syrup into the bottom of the buttered bowl before you add the sponge mixture – add chopped apple, sliced apricots, strawberries or blueberries to the syrup or replace the syrup with jam.)

4. When done, turn off the heat and carefully lift the basin from the water. Leave to stand for 5 minutes.

Baking it easy – simple recipes for bread without yeast

From soda bread to focaccia, here are four tasty breads you can make without having to use yeast

Tara Crean suggests some great meals to make with a vegetable that we seem to be falling more and more in love with...