«Back to the events page
»Flagship Events
»Celebration of Iconic Cars

At Boundless, we put members first and want to reassure you that our members and volunteer safety is our primary concern during the current situation. Unfortunately, this event has been cancelled. You can find more information within the FAQs.

This year, Boundless are celebrating the top 100 cars as voted for by industry experts and you, our members. You can see the results of the vote in the March/April issue of Boundless magazine, where you read the full countdown, find information on all the cars and find out which five topped the poll.

So what makes a star car? Is it all about ground-breaking design and engineering expertise, or does it all just come down to good looks? Judging by the range of models that made it into the roll of honour, there are a range of qualities that fit together perfectly to produce a moment of motoring magic.

Just take a look at the top five in our vote, for example – two of them are movie heroes, one a combination of glamour and speed, one a car for the people and one that just does everything better than any other car. It’s a top five, by the way, which is all British.

To celebrate the winners – and to raise a glass to British motoring history – we’re inviting you to join us at this glittering event at the British Motor Museum in Warwick, where you can get up close and personal with some of the cars which made it into our top 100, and a whole load more classics that didn’t. You’ll enjoy a drinks reception on arrival, followed by a delicious three-course meal with wine and a private tour of the museum.

Plus, during the evening, specially invited guests from the motor industry will talk about the beauty, personality and engineering behind the world’s best cars and what makes us fall in love with them.

Dinner will then be served in the museum’s state-of-the-art conference facility, where you’ll enjoy a fabulous three-course meal with wine, to the sound of live music.

Boundless has been organising celebration dinners since 2017 – from Concorde and Moon Landings to Formula F1 and The Vulcan. They are incredibly popular and always sell out so make sure you get your ticket well in advance.

There will be lots of great motoring prizes to win on the night, and professional photographers will be on hand throughout the evening to capture the best moments for you, your family and friends. All photos will be available for you to download free of charge after the event.

Our Host for the Evening – Dan Read

Boundless are delighted to introduce our host for the evening – traveller, writer, photographer and TV producer Dan Read.

If you’re interested in motoring and travel, you can’t fail to have seen Dan’s work. He’s written for publications including BBC Top Gear, tech journal T3 and, of course, Boundless magazine. He’s no stranger to TV either, having produced films for the BBC’s most popular prime-time car shows and online.

Dan has interviewed the most influential people in the motoring industry and has written about vehicles from amphibious land rovers, tanks and lunar landing vehicles to supercars and classics.

He gets around, too, and has written articles about the crazy world of being a cabbie in Tokyo, driving a Porsche up (yes, up) a ski slope and stargazing in California’s Death Valley.

Vicky Butler-Henderson loves cars. Driving them, racing them, talking about them. Her broadcasting career has included winning 2010’s Broadcast Journalist of the Year, presenting the BBC’s Top Gear and launching Channel 5’s Fifth Gear with Tiff Needell and Quentin Willson. In 2020 she is presenting her brand-new classic-car programme on ITV4 and she contributes to countless publications, including, of course, our very own Boundless magazine.

You just can’t keep her out of the driving seat – at 12 she was racing go-karts and driving anything that moved on the family farm. By the age of 17 she had a weekend job as a racing instructor at Silverstone and was driving in the Formula First single-seater championship. Since then, she’s raced a whole starting-grid’s worth of different cars – perhaps her most notable achievement being the first woman to win a Maserati race in the history of the marque, in the Maserati Trofeo support race at 2004’s British Grand Prix. She’s won trophies at Silverstone and Brands Hatch and come out on top in endurance challenges.

F1 cars, racing lorries, a jet fighter – she’s put them all through their paces over the years. Clearly, there isn’t much Vicky doesn’t know about cars, and she’ll be sharing her stories with us on the night

If you upload any of your own pictures to social media, be sure to use the hashtag #bemoreboundless for a chance to be featured on our pages.

Tickets will be available from Boundless until Monday 7 September at 9am – these are only available in advance and cannot be bought on the day of the event.

By buying tickets, you are consenting to having your photo taken and these images used on any of our marketing platforms. If you don’t wish to have your photo taken or appear on our website or social pages, please let us know when you arrive and we’ll make sure arrangements are made.

This is a member-only event. Not yet a Boundless member? Join today for £28 a year to book your tickets for this exciting event.

Exclusively organised by Boundless for Boundless members. A range of unique, one-off events to celebrate iconic moments and hear from amazing people that helped make them happen. 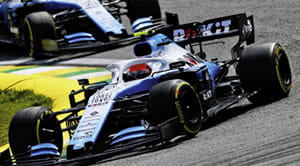 Watch the Abu Dhabi GP with the Williams Team

After last year’s sell out Boundless are back at Williams Team HQ for a private screening of the last race of the year. 2020 looks set to be an epic year in F1 with an unprecedented 22 Grand Prix and F1’s 70th anniversary season. Celebrate the end to the biggest season in F1 history with live presentations from the trackside team in Monaco and Control HQ, plus tours of the museum, full VR simulators and refreshments. Tickets will sell out fast so make sure you are in pole position.

This year Boundless are celebrating the world’s most famous aerobatic display team, the Red Arrows, with a special event on Saturday 24 October.

In 2020 Boundless will be celebrating the top 100 iconic cars that helped change the landscape of motoring. Boundless will be bringing this to life in a gala dinner evening at the British Motor Museum, home of the world’s largest collection of historic British cars.

What is your position with the COVID-19 (Coronavirus) outbreak?

It is with great sadness that Boundless has decided to cancel the upcoming Flagship Event – Iconic Cars.

Boundless have been continually monitoring the latest public health and government guidelines regarding the evolving COVID-19 (Coronavirus) situation and acting in accordance with their advice. With the regulations around social distancing it makes running an event such as this incredibly difficult and costly to deliver.

The safety and wellbeing of our members, volunteers and staff is our primary concern and therefore the only action for all involved is to cancel the event.

Tickets purchased for the event will be fully refunded back onto the card you paid for them. Any cheque payments will be issued a refund cheque via post. All payments will reach you within 10 working days.

We are truly sorry that we have had to make this extremely difficult decision and thank you all for your patience, understanding and support in this unprecedented situation.

How can I get there?

If you’re using your Sat Nav, entering the British Motor Museum will give you more accurate directions than the postcode. There will be plenty of free parking at the museum for this event.

What are the meal options, and what if I have any special dietary requirements?

We’ll ask you to make your menu selection when you book and you’ll also be able to tell us about any special dietary requirements. Please note that meal choices cannot be changed on the night.

What refreshments do I get with my ticket?

Your table will be served with red and white wine throughout your meal. Sparkling and still water will also be available. Should you wish to buy additional drinks, the venue will be operating a cash bar.

Are there any age restrictions?

All ticket holders to this event must be aged 18 or over.

What is the dress code for the event?

As this is an evening dinner event we ask guests to dress accordingly – we advise smart casual clothing.

I have a friend or family member who wants to come as well.

Great, bring them along!

How and when will I get my tickets?

When you purchase your tickets you will receive a confirmation email with an e-ticket attached. Please print this e-ticket out or show it on your phone when you arrive on the night. The Boundless reception will be clearly signposted.

What time does this event start and end?

Once you have purchased your event tickets they are non-refundable. This is because we have a very limited number of tickets and we may not be able to reallocate them. Tickets may be transferred to your friends or family but please email memberevents@boundless.co.uk to let us know of any changes.

How accessible is the site for people with mobility difficulties?

The British Motor Museum is a fully accessible, wheelchair-friendly site.

I don’t have an email address or credit card. Can I pay by cheque?

Yes. If you would rather pay by cheque, contact our membership team on 0800 669944. Please note that you will not receive your ticket until your cheque has been received and payment has cleared. If we do not receive your cheque within 14 days of placing your order, your ticket will be cancelled and you will be notified. Telephone bookings will close 21 days before the event takes place.