The 2017 British Grand Prix is nearly upon us.

On 14th July, the British Grand Prix begins its three-day pedal to the metal contest to find the fastest racing car driver in the world. Here are 15 facts about the biggest event in British motorsport...

1. Grand Prix motor racing was first established in Britain in 1926

Speed pioneer Henry Segrave introduced the sport to a British audience after his wins at the French Grand Prix and San Sebastián Grand Prix increased British interest in the pastime.

2. The first ever British Grand Prix was held in Surrey

It was won by Frenchmen Louis Wagner and Robert Sénéchal, driving a Delage 155B at Brooklands.

3. The first Silverstone British Grand Prix was in 1948

It was won by Italian Luigi Villoresi in a Maserati.

4. Silverstone became its permanent home in 1987

Although Silverstone hosted their first Grand Prix in 1948, it’s only been since 1987 that it’s been permanently based there. In its time, the Grand Prix has also been held at Aintree in Liverpool, and Brands Hatch in Kent.

6. A priest was arrested for running across the track

A defrocked priest by the name of Cornelius Horan was jailed for two months in 2003 after running across the Silverstone track at Hangar Straight mid-race. He was wearing a kilt and holding a banner proclaiming ‘Read the Bible’!

7. A British king or queen has only visited once

The only time a reigning monarch has attended a Grand Prix was in 1950, when King George VI turned up.

Over the three days of the race, the medical staff on hand in case of emergencies include 36 doctors, 24 paramedics and eight nurses.

Alain Prost and Jim Clark jointly hold the record for most Formula 1 wins at the circuit, with five apiece.

11. Despite being in 17 races, Jenson Button has never won the British Grand Prix

He hasn’t even stood on the podium!

It was built on the site of a World War II Royal Air Force bomber station, RAF Silverstone. It was first used for motorsport unofficially in September 1947.

13. The British Grand Prix is one of the two oldest continuously staged Formula 1 World Championships

The other one is the Italian Grand Prix.

14. Ferrari have a record of 16 British Grand Prix wins

That’s the same amount of people as live in Poole in Dorset! 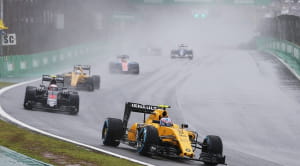 Behind the scenes of F1 with Jolyon and Jonathan Palmer

Behind The Scenes at a Grand Prix