An epic drive around the Norwegian fjords 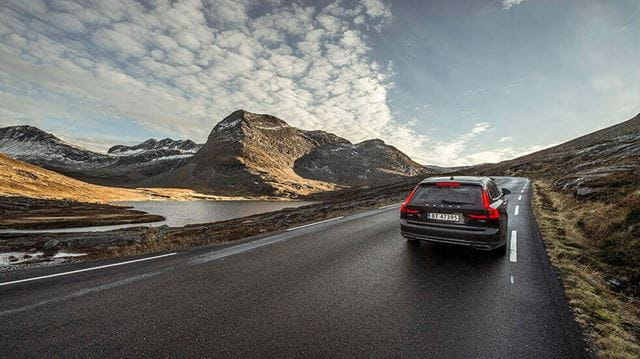 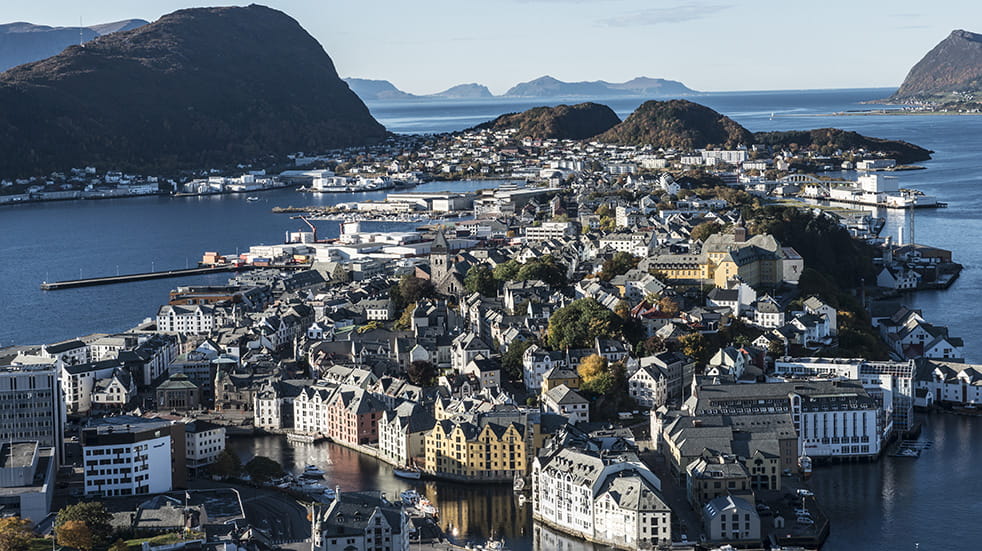 Alesund on Norway's west coast has direct flights from the UK and was the start and finish point for our Epic Drive.

Alesund is a beautiful and unique place, rebuilt rapidly after fire destroyed the old, wooden town in 1904. Norway became independent the following year and the speed with which Alesund was built, the donations that supported the project and the beauty of the new buildings – all colourful stonework and stained glass, even on the fish warehouses – became a matter of national pride.

Despite all that, the town was little known in the UK until the local tourist office lured the BBC to shoot a 1980s drama called Maelstrom here. After the series was shown in over 70 countries, Alesund edged onto the international tourist map. 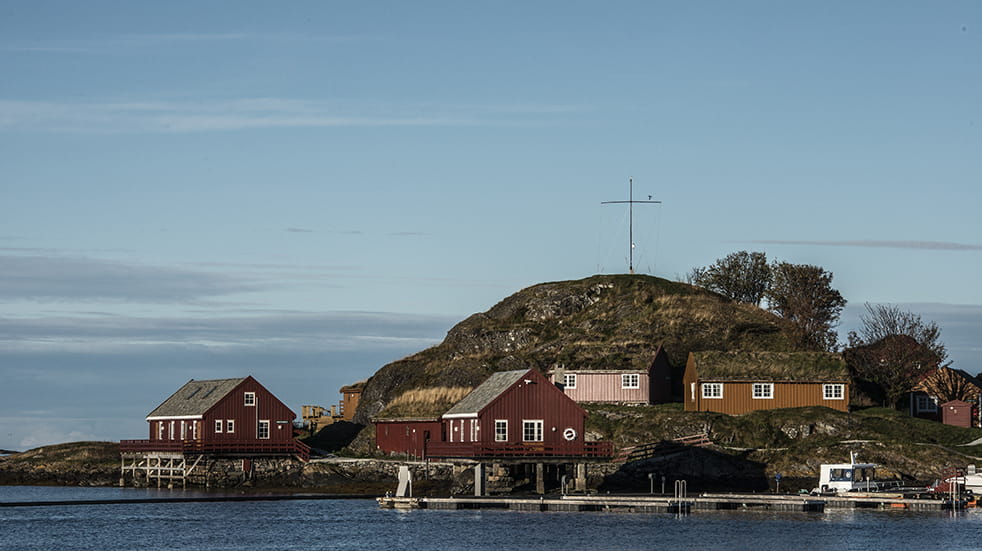 Haholmen is a 10-acre island a five-minute motorboat trip out from the Atlantic Ocean Road. A former fishing community, it is now a unique 'hotel', with 20 cabins, some of which date back to the 1700s. In the 90s, it was owned by the Norwegian adventurer Ragnar Thorseth and there is a museum to his exploits (rowing solo to Scotland, circumnavigating the world in a replica Viking ship etc) on the island.

We loved staying here: getting the motorboat out there felt like being in an Agatha Christie story, and once we were there, it felt almost like a retreat - except with a cosy bar and restaurant. 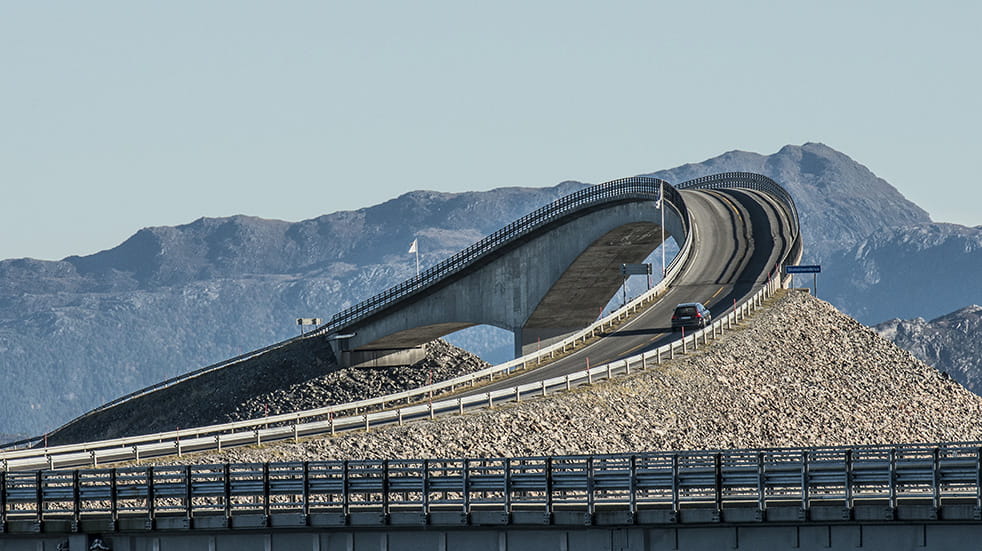 Storseisundet Bridge is the most dramatic part of the Atlantic Ocean Road, routinely used for car ads and promotion. The five-mile stretch of road was built in the 1980s and hops across a series of islands and peninsulars along Norway's west coast. Twelve hurricanes delayed its completion; in winter, the waves crash up over the road, leading to the tag of 'the world's most dangerous road.' 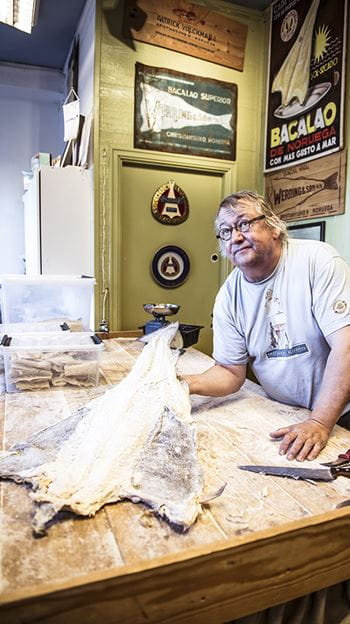 The pleasant town of Kirstiansund, built on four islands at the north end of the Atlantic Ocean Road, is Norway's capital of clip fish: the method of slicing, salting and clipping fish out to dry on the sea shore revolutionised the Norwegian economy. The town has a klippfish museum, and statues in tribute to klippfish workers.

This is Knut Garshol in his klippfisk shop in the harbour, holding a fairly solid preserved cod. Knut chatted to us about the history of the klippfish industry – only to be interrupted by a visitor from further north, pitching his own homemade seaweed snacks: if you don't like seafood round here, you're not going to get the full picture.

For more on Kristiansund and the Atlantic Ocean Road: visitnorthwest.no 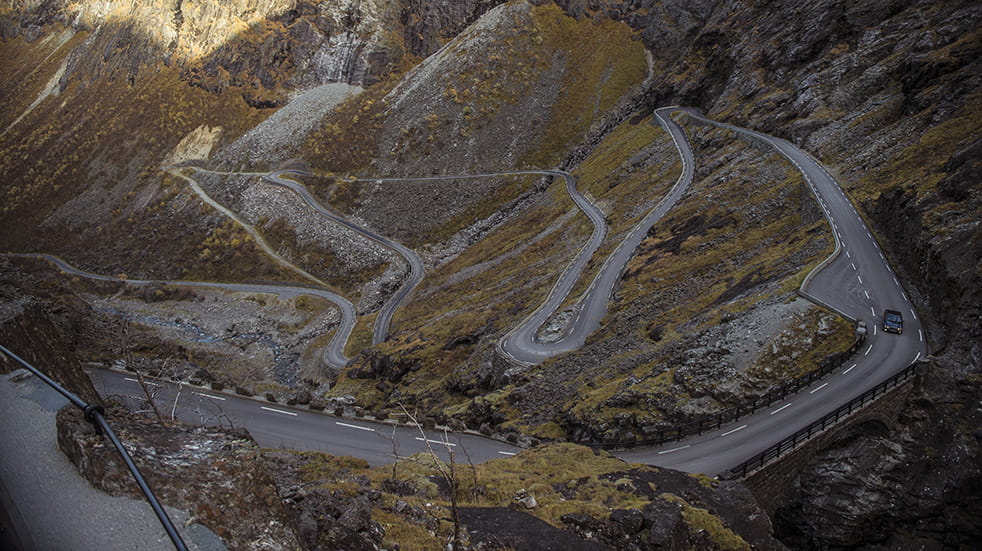 The magnificent Trollstigen – meaning the devil's ladder – is a series of 11 hairpin bends over a four-mile stretch of road, built in the 1930s. It is closed for between six and seven months a year,  when the weather makes it too dangerous. 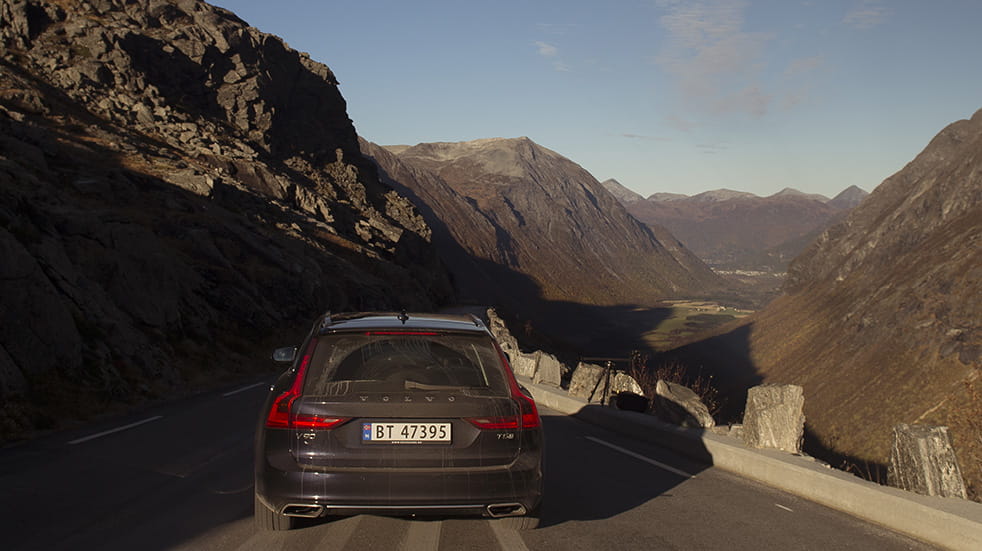 The view from near the top of the Trollstigen, back north down the valley towards Andalsnes. 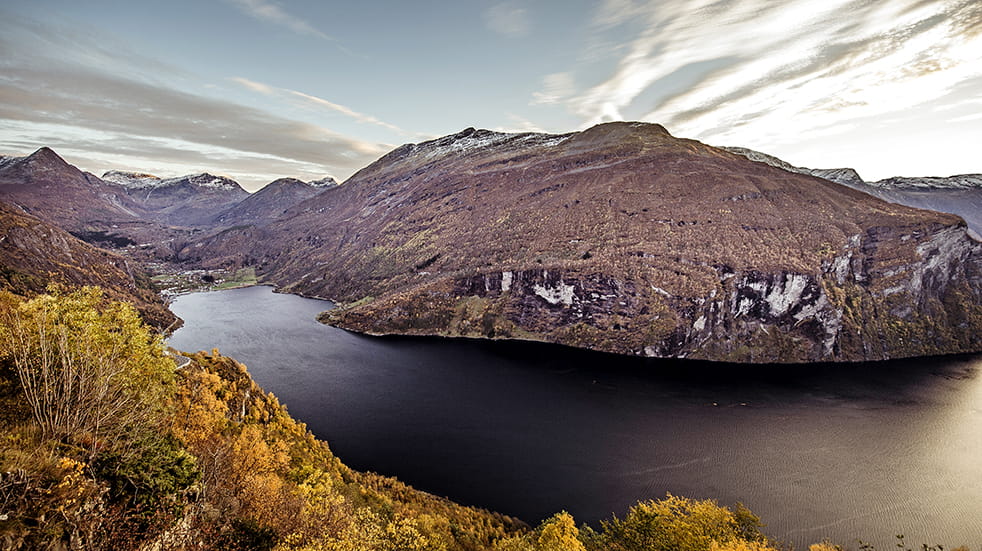 The view over Geirangerfjord from the Eagle's Road – the town of Geiranger itself is on the left of the picture. 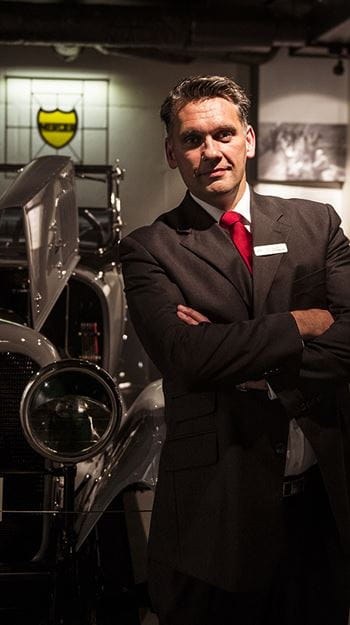 In the basement of Geiranger's Hotel Union (hotel union.no), there is a secret vintage car museum. Sindre Mjelva (pictured) is the fourth generation of his family to own the Hotel Union and he was very happy to show us round.

Between the Wars, the local farmers formed a Taxi Union, buying a fleet of big luxury American cars to drive wealthy tourists around. The museum features many of those original cars: Cadillacs, Studebackers, Buicks and more. It seems kind of perfect that it's here in this colonial-style hotel, in the middle of the fjords.

Geiranger (and the Hotel Union) has moved on from being a resort purely for the super-wealthy, but Norway's Queen Sonja is a regular visitor and the air of contented, country luxury remains. 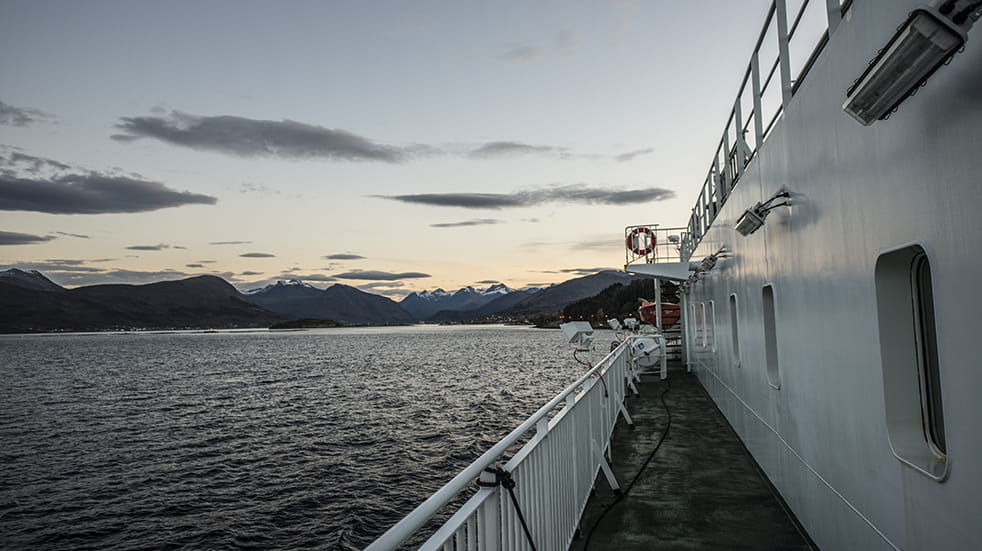 As well as the dramatic roads, a road trip around the Fjords includes plenty of tunnels and, still, plenty of ferries: along these zig-zag coastlines, sometimes a five-minute trip across water can save hours of driving. 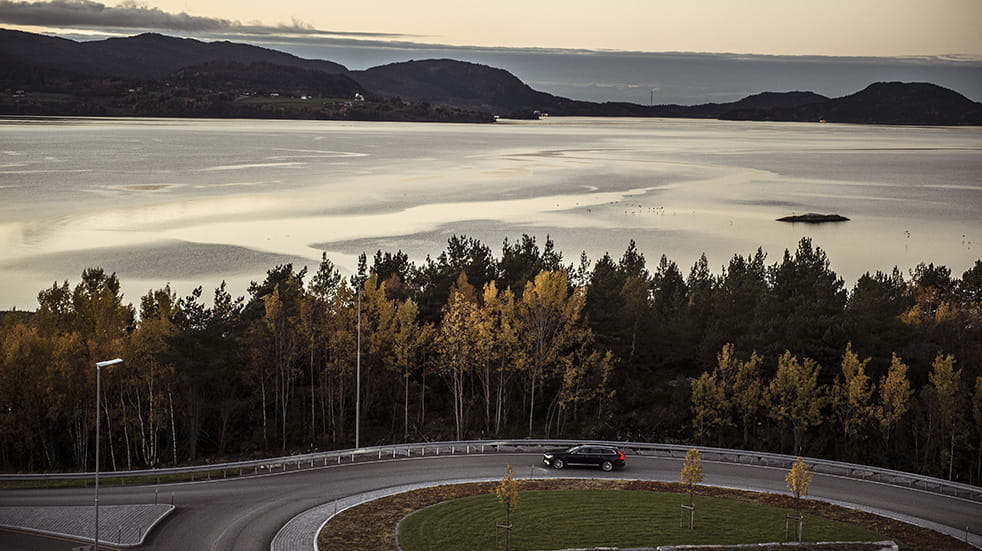 On the road out of Kristiansund, heading towards Molde, with a view over Kvernesfjorden. 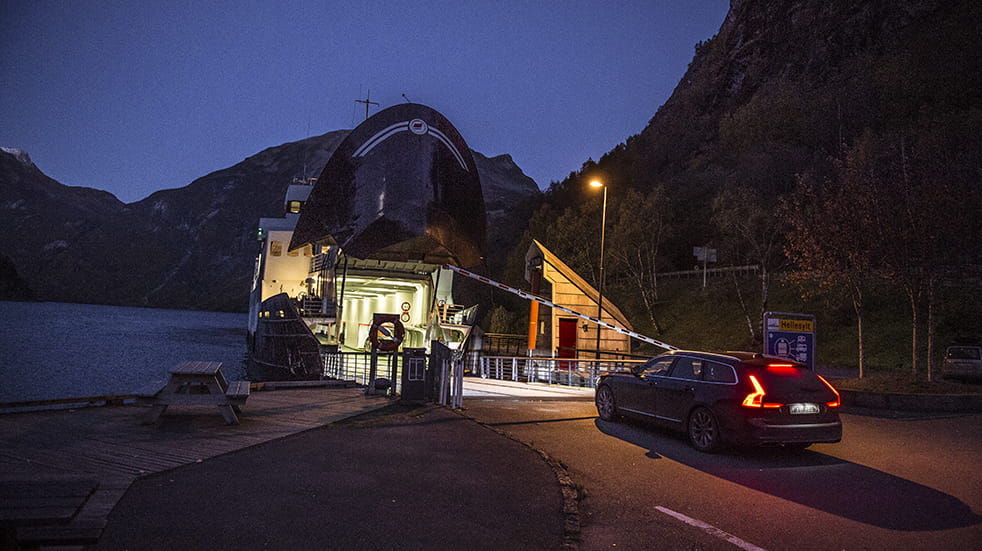 Boarding the ferry at Geiranger at dawn. It's an hour-long trip to Hellsylt along Geirangerfjord, held to be the most photogenic of the fjords.

At the foot of the steep cliffs were abandoned farmhouses and crashing 100-foot waterfalls. On board, we saw Kit-Kats for sale for £3: Norway's GDP is two-and-a-half times that of the UK and the cost of living is not cheap. 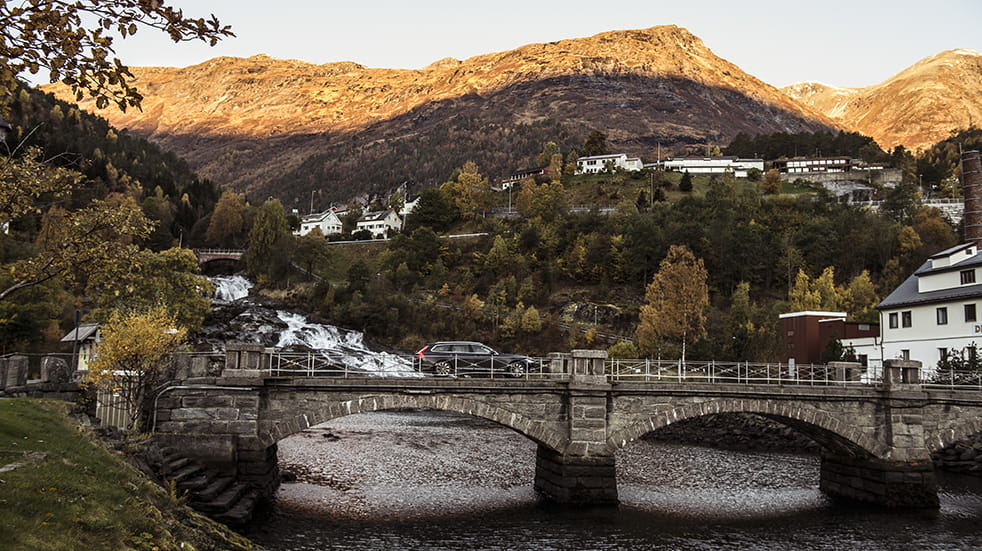 Hellesylt, on Geirangerfjord, on our route back from Geiranger to Alesund.

For more on trips to the Norwegian fjords: fjordnorway.com

For our trip on some of the world's most 'dangerous'/beautiful roads, we chose a new Volvo with two world-first safety features: 'large animal detection', which applies maximum braking force automatically to avoid collisions; and 'run-off road mitigation', which automatically adjusts steering to stop the car leaving the road.

Even on the Trollstigen's hairpins – not necessarily the natural home for such a large, comfortable car – it handled beautifully, feeling quick and responsive. Nonetheless, on more rapid and flowing roads, we found the V90 was at its best as we glided along in its hushed environment. It was ideal for a big road trip – plenty of room for people and luggage,  seriously comfortable – and a pleasure to drive. volvocars.com 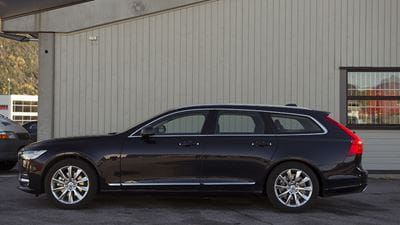 Things to do in the fjords

Kayak More Tomorrow in Alesund offers everything from hour-long taster sessions for kids to a six-day guided kayak/camping expedition all the way up to Geiranger, led by the inspirational Jonathan Bendiksen. (They also rent out bikes and e-bikes)

You can hire cycles and e-bikes from the Tourist Information centre, quayside in Geiranger, with routes to suit all abilities, from 2km circular, flat rides to the 22km ride back over the Eagle’s View to Eidsdal. (There’s a bus to bring you back)

Follow a unique course through the fjord landscape, mixing activities including zip-wiring, swimming and cliff jumping (yes), from a centre based at Sylte, just south of the Trollstigen.

In summer, there are daily fishing trip out from the old fishing community of Haholmen island, even for non-residents of the holiday cottages. classicnorway.com

Take a guided trip around the islands of Alesund in a high-speed RIB boat, to see puffins, seals, porpoises, eagles and - sometimes - whales.

Food in the Fjords

The signature dish of the fjords. Preserved cod, served with a light lemon-butter sauce, a dash of pea puree and pieces of bacon.

Served as a starter: fresh cod or clipfish, with onions, garlic and basil. A staple of the generous portioned, stick-to-your-bones Norwegian cuisine. Great with a glass of chilled white wine.

A break from Norway’s generally simple, warming, wintry fare: a spicy, Latin-style fish (yes) stew, imported at some point during Norway’s hundreds of years of trading fish with Portugal and Spain.

Caramelised brown cheese is a dessert option here. It tastes especially lavish when used as a filling in the dark chocolates made from ingredients at Geiranger Sjokolade, quayside in Geiranger.

The high alcohol tax restrains Norway’s bar culture, but there is a new wave of craft beers, including Geiranger beer, available throughout the Fjords region.

Epic Drive: We drive the Land Rover Discovery Sport around Argyll and Kintyre

An epic drive through the desolate beauties of the Scottish Highlands.

A feast of beautiful Italian engineering and landscapes.

Through cobbled villages and fairytale landscapes, Club Life enjoys one of the great European road trips.