Our routes through Spain’s magical, timeless old towns take in remote mountains, beautiful countryside – and (seriously) a desert. Which will you choose?

1. Madrid to Segovia, via Salamanca

A four- or five-day road trip, exploring the mountains and honey-stoned walled cities around Madrid.

The most scenic route out of Madrid, the A6, takes us north-west from the city, surprisingly quickly through the suburbs and into the mountains: within an hour, the city seems far behind. Our first stop is San Lorenzo de El Escorial, the huge palace/cathedral complex right up in the mountains, that is Spain’s number one royal landmark. Philip II built it in the 16th Century and inside you can see the desk where he signed the order for the Spanish Armada. You could spend most of a day here.

Higher into the mountains we stop at Ávila, the town with the best preserved medieval city walls in all Spain. Then, drive ever higher for an overnight stop at the Parador de Gredos – the remote and terrifically atmospheric royal hunting lodge that, at King Alfonso XIII’s behest, became the first of the government-owned chain of hotels in 1928.

From here, the road winds back down the Sierra de Gredos mountains to Plasencia, a quiet little walled town with a Roman aqueduct, before heading north along the beautiful cherry blossom route through the Jerte Valley, to Salamanca.

While Ávila has the hush of a small town, Salamanca has all the buzz you would expect from Spain’s number one university town, with a friendly atmosphere around its traffic-free centre, unchanged for 300 years. There’s a terrific motor museum and a unique Art Deco museum. Salamanca also claims more bars per person than anywhere in Europe.

You could stop here, or press on the next 100 miles to Segovia, yet another treat and perhaps the biggest: a huge, nine-mile long Roman aqueduct dominates the city. The Alcázar, the iconic, fairy-tale palace/castle is a must-see, but everywhere you turn are elegant 15th Century mansions and squares, a city steeped in the good life, with a history as a royal resort, and sunshine soaked into the honey-coloured architecture.

Boundless members can receive up to 30% discounts on a hotel stay in Madrid.

This is a great road trip through the Andalusian countryside, taking you to many of the region’s famous ‘white villages’, but bear in mind that exploring the white villages themselves is best done on foot.

Flying into Seville, it’s a 50-mile drive south to Arcos de la Frontera, known as the gateway to the white towns. Arcos itself is a maze of white houses tumbling down from a sandstone castle, around a labyrinth of narrow alleys and streets, and little secret courtyards. A magical walled world all perched on top of a giant cliff, with fabulous views over the surrounding plains.

Heading east on the A372, we are soon driving past fields of sunflowers, orange trees and olive groves, on the way to our next stop: the high mountain village of Grazalema, offering great views into the Sierra de Grazalema Natural Park. It’s a great base for a day or two’s walking.

The road over the mountain to the next white village, Zahara de la Sierra, is 10 miles of smooth but narrow, winding roads, with layers of mountain views disappearing into the distance.

In Zahara, another beautiful fortified hill town, time seems to have stood still. Overlooking a huge lake, it is impossibly peaceful now, but, like every town on this trail, was once part of the frontline in the battle between Moors and Christians for control of Spain.

That struggle is reflected all along the route, but maybe most of all in Ronda, a unique town split in half by a dramatic gorge, perched on two towering cliffs and joined by a 400-ft high bridge. On one side: Ronda old town, La Ciudad, a maze of narrow cobbled streets, all in the style of the Arabs who ruled it until the 15th Century. On the other, the ‘new’ town, with its whitewashed houses, built after the Christians had reclaimed the fortress. Soak in the atmosphere of the 11th Century Arab baths on one side – and the oldest bull ring in Spain on the other.

A short road trip in south-east Spain to perhaps the prettiest white village of all takes us on a route that offers something so completely different, that even looking at pictures may disorient you.

This is a road trip with landscapes to suit all tastes: all around the south-eastern coast of Spain from Almería to Mojácar, there are holiday resorts with sandy beaches. But cut across land and you find yourself in Europe’s only desert.

Fly into Almería and begin the road trip heading north on the A7 then the A92. Within 20 miles the road is dwarfed by the epic, empty horizons of the Tabernas Desert. These 280-square kilometres of lunar landscape might fool you into thinking you were somewhere out in the American West – and when you run across the old abandoned ‘spaghetti western’ film sets out there, the delightful confusion will only grow.

Hundreds of movies, including cowboy classics The Good, The Bad and The Ugly and A Fistful of Dollars and, more recently TV shows Game of Thrones and Dr Who, have been shot in the region and three complete fake Western towns remain within a ten-minute drive of each other at Fort Bravo.

At Sorbas, turn off the main drag onto the dusty tracks and you will find yourself exploring genuine ghost villages, abandoned in the 1950s. It’s fun and intriguing – but this is a real desert with no petrol stations, so make sure you have fuel, a spare tyre and plenty of water.

From this other-worldly spot – you can stay here overnight in a bungalow if you want to soak it in a little more – it’s only 25 miles onto Mojácar Pueblo. The perfect little village of white houses and narrow winding streets is perched on a hill, a couple of miles inland from the beach resort, with its warm, clear waters, perfect for swimming. 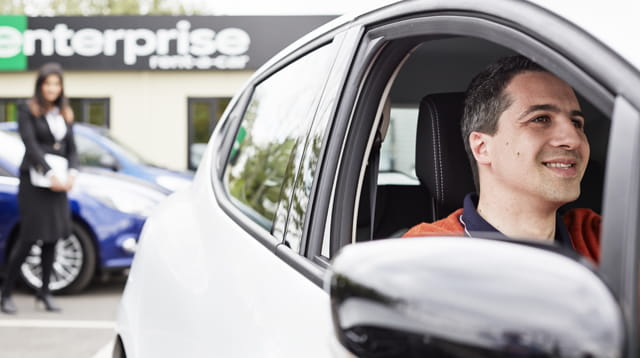 Get great rates on car hire all year round. And if you need a lift to the branch, Enterprise will pick you up …

McLaren: 15 things you didn’t know about the racing legend

To celebrate the release of a new documentary about Bruce McLaren, here are 15 fast facts you might not know about his high-octane life