Peak District connoisseur Roly Smith has written guides to all of Britain’s 15 National Parks. He gives us the lowdown on his favourite part of the UK

In the first of our series of Insider's Guides to the British countryside, Peak District connoisseur Roly Smith – the author of over 80 books (yes, you read that right) on walking and the countryside – tells us why the Peaks are his favourite place to visit.

Boundless: What is your earliest memory of visiting the Peak District?

Roly Smith: I was working as a journalist in Coventry in the early Seventies and I went off with a pal to ascend Kinder Scout, the iconic highest point in the Peak District.

I’ll never forget it, there was a gentle drizzle as we ascended Crowden Clough, but when we reached the summit plateau – a vast quagmire of black peat with not a living thing in sight – the sun came out, and the peat started to gently steam.

The walking author John Hillaby had described Kinder as 'a vast heap of dinosaur droppings' – and that’s exactly how it looked!

An incredible 150 million people are estimated to visit the UK’s 15 National Parks annually – which is the busiest one?

Well it was originally accepted that the Peak District had the most visitors - around 19 million annually – until the creation of the South Downs National Park in 2010, which claims 39 million – mainly because, as a linear park, it has more cross-park traffic.

If you had a whole day to roam anywhere in the Peak District, where would you go?

That’s a tough one… My favourite walk is usually the next one!

I suppose it would have to be Kinder Scout, because of its memories, its place in the history of access, and –  most of all – its incomparable beauty in all seasons.

And the view from Kinder Downfall, the 100-foot waterfall on its western edge, is simply breathtaking.

Can you tell us about the Kinder Trespass of 1932 and why it was so important?

A 'mass protest trespass' on the highest hill in the Peak District led to six Manchester ramblers going to jail just for walking on the moors.

It was an important catalyst for the creation of our National Parks and the opening up of common land that had been stolen from the people by Enclosure Acts in the 18th and 19th centuries.

Eventually, walkers won the right to roam in open country under the 2000 Countryside and Rights of Way (CROW) Act.

What is your favourite artistic interpretation of the Peak District?

It’s got to be the photographs of people like Joe Cornish, my partner in my latest book This Land, and the late Mike Williams, with whom I did my first book, First and Last, on the Peak District in 1978.

(Middle two photos, by Joe Cornish, are the view towards Swine’s Back from The Woolpacks, Kinder and Crowden Clough – both in the Peak District – which appear in the book.)

When did the Peak District first play host to early humans?

It’s generally accepted that humans reached these islands fairly soon after the last Ice Age, about 10,000 years ago. They certainly left their art – the earliest yet discovered in Britain – in caves at Creswell Crags [pictured].

And it’s been shown that the moors began to be cleared of their original tree cover from about 4000BC onwards, as flint scatters among the peat have shown.

One of my most prized possessions is a tiny sliver of flint – known as a microlith – which was dropped by a Middle Stone Age hunter about 5000 years ago.

What is the Peak District like for gastronomy? Where do you recommend for a hearty lunch or supper?

There are some great restaurants and microbreweries in the Peaks.

One of my favourite places for lunch is Mellor’s Cutlery Factory and restaurant just outside Hathersage.

It was built on the site of the village gas holder, so the cutlery factory is round! For a hearty dinner, try Biggin Hall at Biggin-by-Hartington, near Dovedale.

What’s your favourite time of year in the Peak District?

I love early autumn, when the heather is in glorious bloom and the trees are slowly changing into a riot of beautiful colour. But the spring is lovely, too… and you can’t beat a winter walk on Kinder after the crowds have gone.

Why did it take so long for the UK to introduce the concept of National Parks, which the US first adopted in the 1870s?

The main reason is because of the historically different land ownership situation here and in larger countries, such as the US, Canada and South Africa.

In Britain, all the land in our National Parks is owned by private landowners, just like everywhere else.

In larger countries, there is more uninhabited wilderness, and the land in the parks is owned by the nation, so they are more truly ‘national’ parks, run by a Governmental National Park Service.

What are the advantages of an area being granted the label of National Park?

The main benefit is that planning is controlled within the park by an independent planning authority – the National Park Authority. This means that, in theory at least, harmful development such as mineral extraction, unsightly industrialisation and motorways should not be allowed within its borders, and conservation work can be done to protect it for future generations.

Even on a busy Bank Holiday, you can still escape the crowds and traffic by getting out of your car and going for a walk.

A lot of good work has been done by all the parks on footpath maintenance to combat erosion. And this on a shrinking budget which, on average for each park, is about the same as a medium-sized comprehensive school.

Are there other areas of the UK you feel are deserving of the National Park title?

You bet! The North Pennines is deserving of national park status, linking with the Yorkshire Dales and Peak District North Pennines. The Cambrian Mountains of mid-Wales have also been proposed, along with the Isle of Harris in the Outer Hebrides of Scotland. All deserve the title and the protection it brings.

Roly Smith was head of information for the Peak District National Park (the UK’s first National Park) for 13 years. His latest book, This Land (Frances Lincoln, £30 quartoknows.com/books), is a collaboration with top landscape photographer Joe Cornish, and features around 50 of the pair’s  favourite places in Britain. 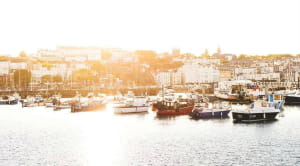 Not quite Britain, not quite the continent – sunny beaches and a flourishing foodie scene make Guernsey an idyllic short break

Best of Sheffield: an insider's guide to her home city

Sheffielder Helen Tann shows us around, and shares her top tips on places to go and things to do in the city