The Grand Tour of Switzerland is a 1000-mile tourist route, set up in 2015 and linking together amazing highlights from all over the country via the most beautiful scenic roads. The route takes in 22 lakes, five Alpine passes, 12 UNESCO World Heritage sites and non-stop breathtaking views and attractions. To see the route in full, please go to grandtour.myswitzerland.com/en/.

Here are some of the highlights of the Grand Tour... 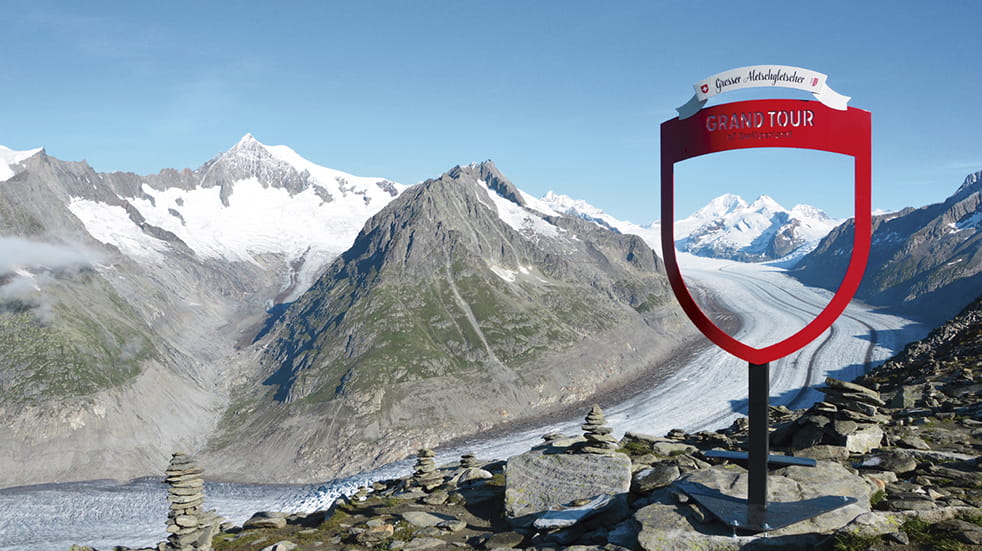 Mother Nature has pulled out all the stops in Switzerland – a country blessed with natural wonders on the grand scale. Many of them are located directly on the Grand Tour or just a short detour away. Take, for instance, the Aletsch Glacier [pictured]: it's the centrepiece of the Swiss Alps Jungfrau-Aletsch UNESCO world heritage site and the mightiest ice flow in the Alps: here, you can see 27 billion tons of ice moving slowly through the Alps.

The Grand Tour takes in some of the most impressive roads in the world: there are five spectacular mountain passes along the route, including the Furka pass made famous in the James Bond movie, Goldfinger [Treat yourself: watch it again here]. The Tremola road [pictured] is one of the most daunting of all. Built in the early 19th century and remade with hundreds of thousands of granite blocks between 1937 and 1941, the road starts in Airolo and climbs countless winding bends to reach the top of the 2,106-metre-high Gotthard Pass.

Pick up the official Grand Tour of Switzerland snack box [pictured] at over 40 different points of sale along the route and refill it along the way with typical regional specialities. You can even see for yourself where these specialities are made: stop off at the town of Gruyères to visit the world-famous cheesemaker – or find out the secrets of Absinthe in Val de Travers and learn why the medicinal elixir of wormwood, anise and herbs was once banned.

From architectural highlights to outstanding museums and towns steeped in history, the Grand Tour is not just about spectacular scenery. The city of Fribourg is filled with more than 200 original Gothic facades from the 15th Century, lending to its unique charm. The city of Basel is home to 40 museums, including the Foundation Beyeler [pictured], housed in a stunning building designed by Renzo Piano, architect of the Pompidou Centre and The Shard. The gallery features works by Monet, van Gogh and Cezanne – and 23 Picassos.

German, French, Italian and Romansch is spoken in Switzerland and the Grand Tour takes you across all four language regions. The country's remote valleys are home to an incredibly diverse range of customs, traditions and architecture. Pictured: Part of the Almatrieb, the autumn 'cow train' when nearly 400,000 cows come down from the high Alpine meadows, where they spend the summer, to their winter homes in the valley.

Switzerland’s 6,750 lakes and more than 65,000km of rivers and streams make the country a water wonderland. The Grand Tour reveals waterways from their most spectacular angles. Take in the captivating Rhine Falls, Europe’s largest waterfall with a height of 23m or the Jet d’eau [pictured] – the most visible icon in Geneva and also Europe’s highest fountain at 140m.

The route is fully signposted, taking you round the best of Switzerland in a clockwise direction. You don't need to do the whole route in one trip, of course, but if you were planning to, you would need at least 10 days to take everything in at a comfortable pace (an added factor may be that you can load your car onto a train for part of the journey, to save time or driving effort). May-October are the best months to drive the Grand Tour of Switzerland.  The Grand Tour can be travelled in both directions, but Switzerland Tourism recommends you make the journey clockwise. 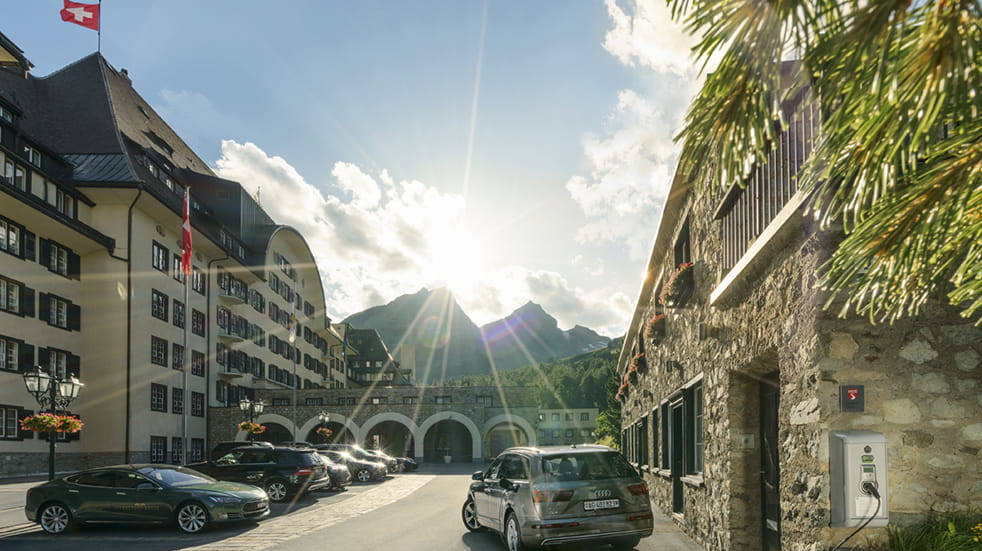 Since 2017, the route has been made even more accessible for electric vehicles.  The entire tour has been energised by an extensive network of 200 charging stations, guaranteeing 1,000 miles of clean driving pleasure. This makes the E-Grand Tour the first touring route worldwide to be entirely navigable by electric car.

The Michelin Green Guide to the Grand Tour of Switzerland was published in December 2016 and is available from the Michelin site, Amazon and bookshops. The Michelin Green Guide Grand Tour of Switzerland with its star-rated sights, clear maps, recommended excursions, hotels and restaurants, plus walking and driving tours, makes for an incredibly rich travel experience.The guide includes a pullout map of the entire circuit, reviews and rating of each attraction, detailed visitor information as well as hotels and restaurants recommendations.

Get your Michelin Green Guide to the Grand tour of Switzerland on travel.michelin.co.uk/grand-tour-of-switzerland-1833-p.asp