The expert guide to Venice: what to see and where to go

Fall in love with Italy's city of canals, with the magnificent St Mark's Basilica, gondolas and the Rialto bridge. Get the inside story from specialist tour operator Jules Verne

For centuries artists, poets and lovers have been captivated by the romance of Venice, mesmerised by its maze of pathways, bridges, islands and waterways and inspired by the grandeur of its piazzas, domes, mosaics, and monuments.

It’s a magical city built on water which, quite rightly, attracts tourists all year round, particularly in the summer months, but stick with an expert guide and you can escape the crowds. Jules Verne’s Venice from the Water Tour is the perfect way to see the city. You’ll stay on a boat, within easy reach of the centre, so you’ll experience all the sights and sounds of the city but avoid the hustle and bustle of staying there - and the high costs too. Not only will you get to see Venice from a whole different perspective, you’ll also be able to explore its island-filled lagoon.

Things to see and do in Venice

Venice is one of those cities where you can happily while away the hours wandering around its narrow streets and along its canals, getting lost as you admire its gothic, marbled facades and peak inside quirky boutiques and buzzy cafés. Head towards Campo Santo Stefano, exploring the little lanes of San Marco and the bridges of Rio dei Barcaroli, and get a fabulous view of the Ponte dei Sospiri (Bridge of Sighs).

Soak up the splendour of St Mark’s Square before heading to its famous Basilica (at its most stunning when the rays from the setting sun catch the light of its golden mosaics). Entrance is free but it’s worth paying the extra €5 to climb the stairs to the loggia to see the original four bronze horses and for the views of St Mark's Square and the lagoon beyond.

Afterwards, go next door and take a guided tour of the extravagant Doge’s Palace, built in the 14th and the seat of the government of Venice for centuries, to explore the living quarters, government courtrooms and the prisons where the legendary Casanova was once confined.

Also take time to visit Chioggia, a charming fishing port on the southern side of the lagoon known as Little Venice with its own pretty canal lined with bobbing fishing boats.

A ride down the Grand Canal in an open-top water taxi, gliding under its four bridges, each built in different eras. Make sure you take a photo as you pass under the most famous - the Rialto Bridge.

Traditional Venetian dishes make the most of the fresh fish and seafood brought in every day from the Adriatic Sea and the asparagus, artichokes and other succulent vegetables grown on surrounding islands. Favourites include fritto misto (shrimp, calamari and fish balls in crunchy deep fried batter) and sarde in saor (sweet and sour sardines with onions cooked on a low flame and mixed with raisins and pine nuts).

A gondola ride is part of the ritual of a Venice trip but be aware that gondoliers won’t always stick to the set prices. Make sure you know exactly what you’ve agreed before you set off (being serenaded can cost extra and the rates jump considerably at night) and check your watch too to make sure you get the full 30/40 minutes you paid for. Or, take a gondola ride for just €2 per person by taking one of the large traghetto gondolas that cross the Grand Canal at strategic points, and do the crossing standing up, like the locals.

Take me to Venice

Explore Venice on Jules Verne's Venice from the Water tour, 4 nights from £775. 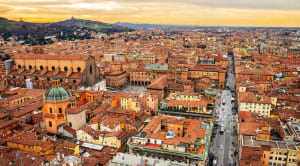 A weekend in Bologna: the best things to see and do

It may not be as well known as some other Italian destinations, but the city of Bologna has much to recommend it

10 of the best things to do in Florence

From strolling along the river eating gelato to climbing to the top of the duomo, there’s a lot to love about this Renaissance city

Voyages Jules Verne has over 40 years' experience of bringing adventure to its clientele, with its expertly planned private and group tours to all seven continents.

See the world differently with Hurtigruten

Not your ordinary experience, and expedition cruise with Hurtigruten promises unforgettable exploration, inspiring landscapes and the chance see the world differently

Thanks to Holiday Property Bond, more and more families are enjoying lifetimes of holidays they can be sure of, with a choice of 1,400 sites in 30 locations across the UK and Europe

Santa and Lapland have been synonymous for centuries, and his permanent residence offers far more than just a meeting with the great man himself